Friends Fest: The One With Grace 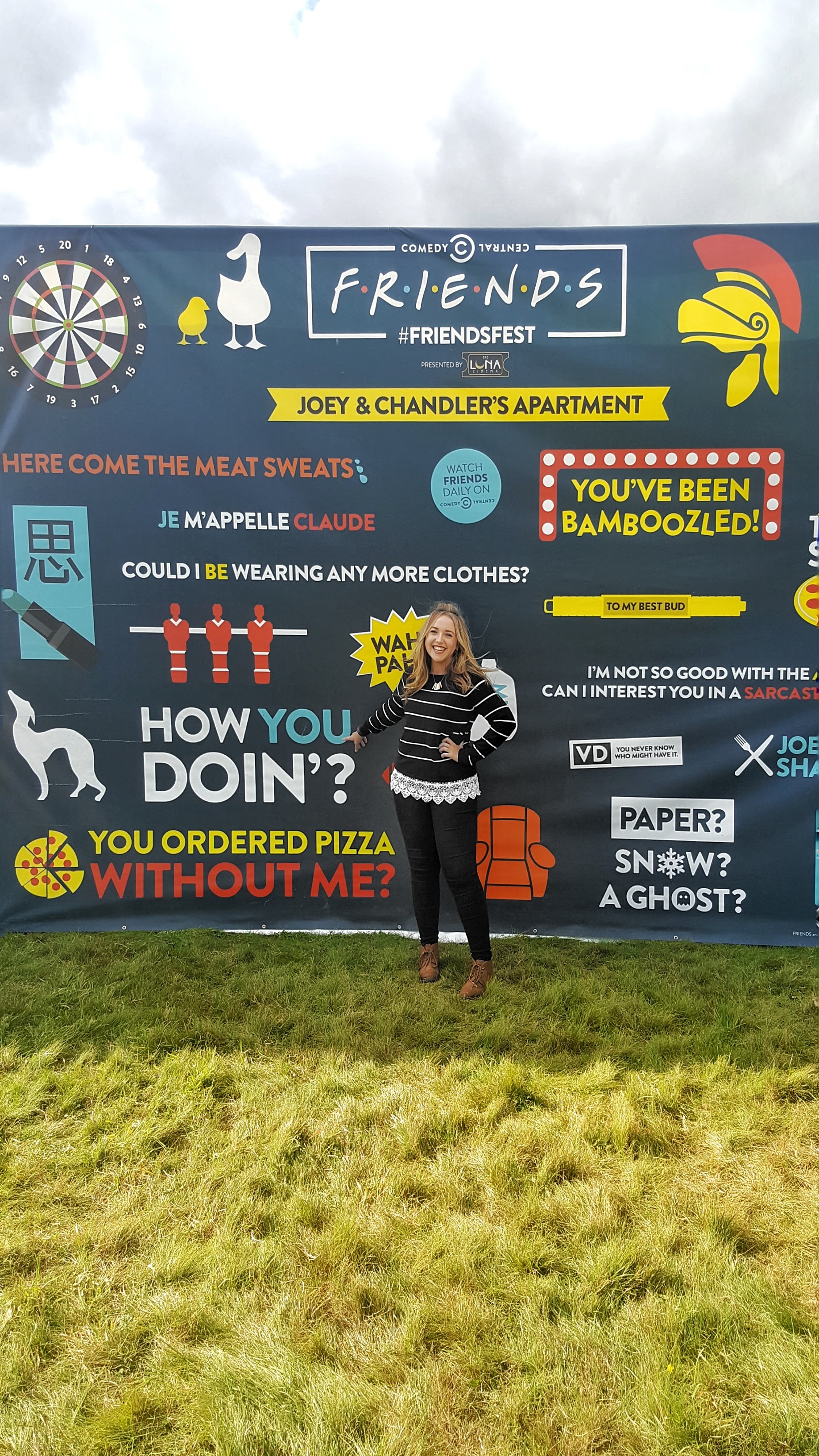 If you grew up in the 90’s, there’s a fairly high chance you recognise these 6 people…

Friends has been a massive part of popular culture for over 20 years now. With a run of 10 series’ and a whole load of storyline ups and downs inbetween, Friends is a true cult classic. Starting in 1994, the 6 characters have always been loved and admired by many of us viewers for their quirks, personalities and personal journeys. I’m presuming from now on in that if you’ve come here to read this post then you must have seen some if not all of the episodes! So, without further ado, here’s my experience at Friends Fest…

Our first stop at the Hylands Park leg of the Friends Fest tour was to re-enact the title sequence! Each of us grabbed umbrellas and headed onto the couch set which was complete with the iconic fountain background and Tiffany lamp.

I was so impressed with how super organised the event was! Helpful staff were on hand to take photos for you on your personal phones and cameras – Major points to Friends Fest for no sneaky hidden costs of having to buy your professional photos! Quashing all my fears of coming away with a stack of rubbish photos, the staff were actually great at taking photos and super accommodating too. Infact, they often encouraged us to opt for a combo of video footage, boomerangs and pics. I’d read reviews beforehand which warned of how limited it was with poor quality pictures produced – I can happily say this was totally not the case for us!

After a few very short queues, we were helped into replicas of Monica and Rachel’s prom dresses (complete with wigs!). You guessed it… We had our Lincoln High prom photos taken!

Moving over to the Las Vegas wedding scene inspired by Ross and Rachel’s drunken marriage, we were then dressed in wedding dresses. We also got to put on Joey’s gladiator get-up from his job at Caesar’s Palace (S5E22).

We dived into the Friends Fest gift shop pretty early on. I was so impressed with the branding and designs I’d seen at the event. The striking, colourful icons and phrases completely captured key quotes from all the episodes. I simply had to buy a t-shirt – Well done to the Friends Fest designers for the awesome graphics everywhere!

Back into the land of Friends Fest and it was time for another crucial location from the series.
As you do, we wandered into Central Perk.

Thankfully we had bought one of the iconic, green aprons from the gift shop. We popped the apron on and each of us headed behind the counter to serve customers sneeze muffins and freshly brewed coffee.

I have to say sitting down on the orange couch was an awesome, surreal feeling!

It was then time to jump on to Phoebe’s stage and sing Smelly Cat from the top of our lungs.

Outside of the coffee shop, another photo opportunity awaited us – We found ourselves hopping into an authentic version of Phoebe’s yellow taxi cab!

Stopping for a spot of lunch, there was so much on offer… Stands included Mockolate, Monica’s Moondance Diner, My Sandwich and a few more!

Whilst it was a super hard decision, I opted for The Moist Maker sandwich in homage to Ross.

Fun fact: A lady actually dropped a sandwich next to us – Cue her friend shouting “MYYYYY SANDWICH” as loud as she could!

After lunch, it was time for our Friends Fest set tour!

After a short time waiting, we were guided into the first part of the tour experience. Our group of fellow Friends fanatics gazed into the cabinets and cases in complete awe. All around the room, you could hear little gasps and voices whispering excitedly “oh my god, look at THIS!”.

In this room of treasures, they had collated tonnes of crucial props and iconic design pieces from the show. My personal favourites included the *actual* copy of Ross’ hand-drawn Science Boy comic, the Holiday Armadillo costume in all its quirky/kinda creepy glory and the white dog from Joey and Chandler’s apartment.

Walking over to another cabinet of Friends items, I spotted a stack of hand-written papers. I guess I just presumed it was script notes. NOPE. Turns out it was Rachel’s letter to Ross from Season 4. This stack of papers was in actual fact all 18 pages of the letter… “FRONT AND BACK”. Amazing!

Once our eyes had completely soaked up all of the treasures, we were treated to some exclusive footage of the cast members. We all gathered under a neon sign taken from the actual Burbank Warner Bros set where each episode was filmed, eagerly watching the clips.

The short film showed the fresh-faced, excited actors and actresses right at the beginning of their careers with the show. It then flitted to clips of them ahead of filming the final episode and looking back retrospectively on their journeys. Much older and perhaps wiser, the gang speculated how they personally wanted the epic series to end. It was such an intense, emotional bit of film to watch – A lady in our group did actually break out into tears!

Onwards and into the set of Joey and Chandler’s apartment!

We were let loose in the room and, of course, we immediately hopped into their “3, 2, 1 draw!” reclining chairs.

Oh and you’ll never guess what I found in the freezer… Joey’s copy of The Shining (S03E13)!

We reenacted everything in the boys’ apartment – From having a quick game of foosball to writing a memo on the Magna Doodle on the back of the door!

We even got to sit in the canoe and chill on the sofa with Joey’s Hugsy penguin toy. Our guide told us this replica was actually made by a Friends super fan in Poland – Impressive!

Moving through the corridor and into Monica’s apartment, I simply had to stop inbetween for a few photos.

For me, the corridor is quite a crucial part of the show as it’s where so many great scenes happen. Oh and if only there had been a dropped cheesecake, I’d totally have re-enacted that scene (S07E11). For me, this part of the set was a real “woah, this is exactly as I imagined it would be” moment.

That said, every aspect of the sets was perfect. So much detail and thought had gone into creating realistic scenes to please fans like myself – Huge respect to the team of designers and creators of Friends Fest for that!

Stepping into Monica’s apartment, we explored every inch of the set!

The kitchen shelves were fully stocked with American brands, there were freshly baked cookies on the table and it was all immaculately tidy as I had imagined it would be.

In Monica’s apartment, visitors could even see a replica of the recipe book which birthed Rachel’s awful trifle (complete with stuck-together, torn pages!).

My favourite spot was at the desk by the window seat.
We looked incredibly closely for a glimpse of the ugly naked guy!

I also found the Pictionary board (“BYE BYE, BIRDY?!”) and we relaxed on the comfy sofa infront of the TV. We basically did everything thing you’d want to do at a visit to Monica’s!

A major highlight for me in this set was of course the iconic, framed peephole on the back of the door…

Guided tour over – Back to exploring the Friends land by ourselves!

We grabbed some cocktails from the Duck and Chick bar and sat in the deckchairs to watch clips of Friends on the big screen.

We were all treated to some on-stage entertainment by the witty Friends Fest compère who encouraged plucky guests to jump up and learn the NYE routine. That was such a great touch and was really hilarious to watch! I think we’ve just about memorised the moves ready to impress everyone at the Christmas party.

Having done everything, seen everything and pretty much taken 300+ photos of every inch of the Friends Fest, we stepped out of NYC and back into the reality of Essex.

As we were just leaving, the weather took a turn for the worse. Thankfully, we got back to the car in time before the heavens opened!

Our experience at the Friends Fest was pretty amazing. It’d be so cool if they had a few actors or lookalikes walking around – Not necessarily the main characters, of course, but perhaps Richard and Estelle or even Gunther in the coffee shop. Imagine Janice wandering around hyperventilating as she screeches ‘OHHHH MYYYY GOD’… The team could also do with restocking products in the gift shop and perhaps having a few more veggie food options available.

We all absolutely loved Friends Fest – It was such a great event and I would totally recommend it if you manage to get tickets for the next tour! From 10am on Tuesday 27th March, tickets are on sale to Friends Fest members. They get snapped up super quickly so keep your eyes peeled for the general sale.

I hadn’t actually realised it was a product of The Luna Cinema group… I’ve been wanting to go to one of their movie events for SO long and my experience at Friends Fest has spurred me into booking other events with them for sure!
A big thank you to the awesome team at The Luna Cinema, Friends Fest and Hylands Park for a great event.

If you loved reading this post, I seriously recommend you take a read of the time I went for dinner with Roald Dahl’s The Twits. It was such a brilliant immersive dining experience! For another Essex-based event, read all about our time at the Apple Day at Cressing Temple Barns – Such a quirky little event!

Are you a Friends superfan? Have you been to an event like this? Let me know! I had so much fun and would love to hear what else you recommend I try out. Leave a comment and I’ll get back to you… 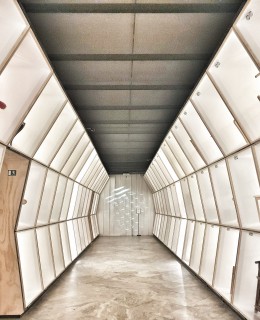 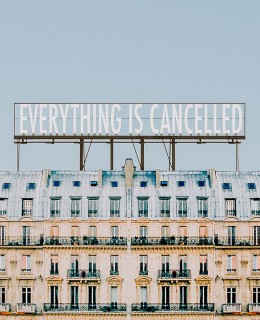 INSPIRATION DELIVERED STRAIGHT TO YOUR INBOX
SIGN UP FOR UPDATES NOW